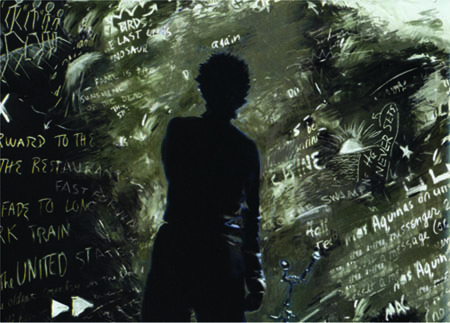 Conceived as a series of short mystery plays, Delusion jump cuts between the everyday and the mythic.

Combining violin, electronic puppetry, music and visuals, Delusion is full of nuns, elves, golems, rotting forests, ghost ships, archaeologists, dead relatives and unmanned tankers told in the colorful, poetic and imagistic language that has become Anderson’s trademark. Inspired by the breadth of Balzac, Ozu and Lawrence Sterne and employing a series of altered voices and imaginary guests Anderson tells a complex story about longing, memory and identity. At the heart of Delusion is the pleasure of language and a terror that the world is made entirely of words.

“You begin with a blank mind. There is absolutely nothing in it. Not a single picture. There is a void. No names. The first thing to wander into this mind is a small spotted dog named Terence and his owner, historian and social commentator Fenway Bergamot.”

This performance is made possible by the W. Ford Schumann ‘50 Endowment for the Arts and The Lipp Family Fund for Performing Artists.